Home > MediaAndSociety > $550 for Dyson’s Airwrap: Worth it or Nah?

A new microsoft surface costs buyers around $550. A Honda Wave motorcycle costs lower than $500. Gold with half of a troy ounce costs around $550. Even one middle-size room located in the urban area costs residents only $550 each month.

$550 seems to be a huge amount of money where people can spend on living. This price rate seems to be a normal rate for Dyson’s products. The Dyson products’ price ranges from $400 to $700. When the Dyson landed, it was an innovative product that stunned a number of people, by two important topics. First, some would think ‘what a product costs people arm and leg’. Second, some would praise or criticize it by the features and quality presented.

Dyson, a firm known for its bagless vacuum cleaners and high-end air purifiers, was one of the first to enter the personal care market. The introduction of its Supersonic hair dryer was an immediate success with the beauty community, despite the fact that the change was greeted with skepticism and skepticism considering its status as a home appliances company. The Dyson Airwrap Complete Styler has been developed to work with a range of hair forms and styles. Users can twist, wave, smooth, and dry with no excessive heat thanks to Coanda air styling and the Dyson digital motor. It was with the release of the second hair styling device, the Airwrap styler, in 2018 that people went insane. So, what’s the big deal, and how exactly does this thing work? It is all about the Coanda effect and the magical airflow. The Airwrap, which is described as a “styling product designed to produce curls, waves, and smooth blow dries without excessive heat” by using jets of air rather than heat, stated by McEvoy (2018). The temperature will never rise above 150 degrees Celcius due to intelligent heat management with a glass bead thermistor that tests the temperature up to 40 times a second, which will help ensure hair does not get exposed to excessive heat and prevent the earlobes from burning. 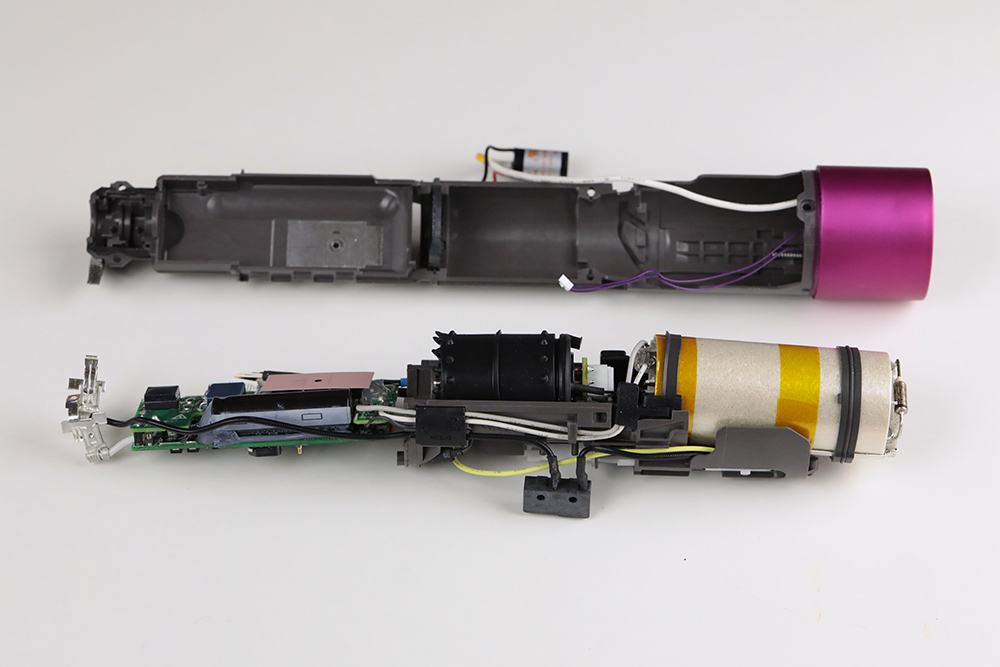 Well, the technical knowledge would not be provided much longer since this blog is intended to give people another view about Dyson Airwrap. Why was I interested in it at first? The company’s corporate marketing philosophy was not difficult to decipher when they first opened in Thailand. This was a brand that catered to a very specific demographic. I would say that this brand has a very small niche market; even among a sphere of my friend, the brand rarely stepped into their mind. As a result, it did not see the need to engage in large-scale marketing strategies. Instead, they used social media influencers, a new equivalent of word-of-mouth advertising. For this reason, I was convinced to increase interest towards the brand and helped my decision making. Let’s see how it works.

I have to confess that this was not the first Dyson’s hair Dyson I spent hundreds of dollars on. In fact, the one I kept into the box at home lately was unbroken and its function still works well to meet the demand.

It seems that it is not only me who willingly purchased the Airwrap. The buzz around the expensive and innovative hair styler made the company’s founder, James Dyson, the wealthiest man in the United Kingdom in 2018 after launching this hair dryer. At that time, the company’s net worth has experienced a 37-percent increase compared to the previous year. According to Dyson, the increase in profit in 2018 was mostly due to the selling of its beauty goods in Asia, which accounted for more than half of the company’s overall sales. In October the same year, the Dyson Airwrap became one of Dyson’s fastest selling products.

Who is behind this success?

Dyson contacts several marketing agencies in several countries, from the UK to India to Thailand. One of the AI powered influencer marketers is Vensy which adapts the innovative approach and message to the sound and audience of each influencer. It is a winning formula any time when this is combined with discovering the right brand and influencer audience match, which is exactly what Dyson did. They made connections with a wide range of women who not only suited their profile but also had audiences in the generational subset.

Dyson had to come up with a creative way to educate the people. Their new curling iron is not a conventional curling iron as I said it uses the Coanda effect, which involves high-powered air pressing hair to curl around the barrel, and low heat to produce the styles, resulting in waves and curves without the damaging heat that most curling irons use. It is like a lesson that Dyson spontaneously cultivates social media users.

A non sponsored review of the NEW $550 Dyson Airwrap, Brad Mondo is my favorite hair styler. In his video he reviews every single detail how to use the dyson airwrap. I would say that he was very honest because of his facial reaction. He said that this product is a cool innovation, but he was not sure that it would work for everyone because it depends on the hair types. I would recommend watching his video before you decided to buy it, since he was honest to the audiences and not trying to sell the product. 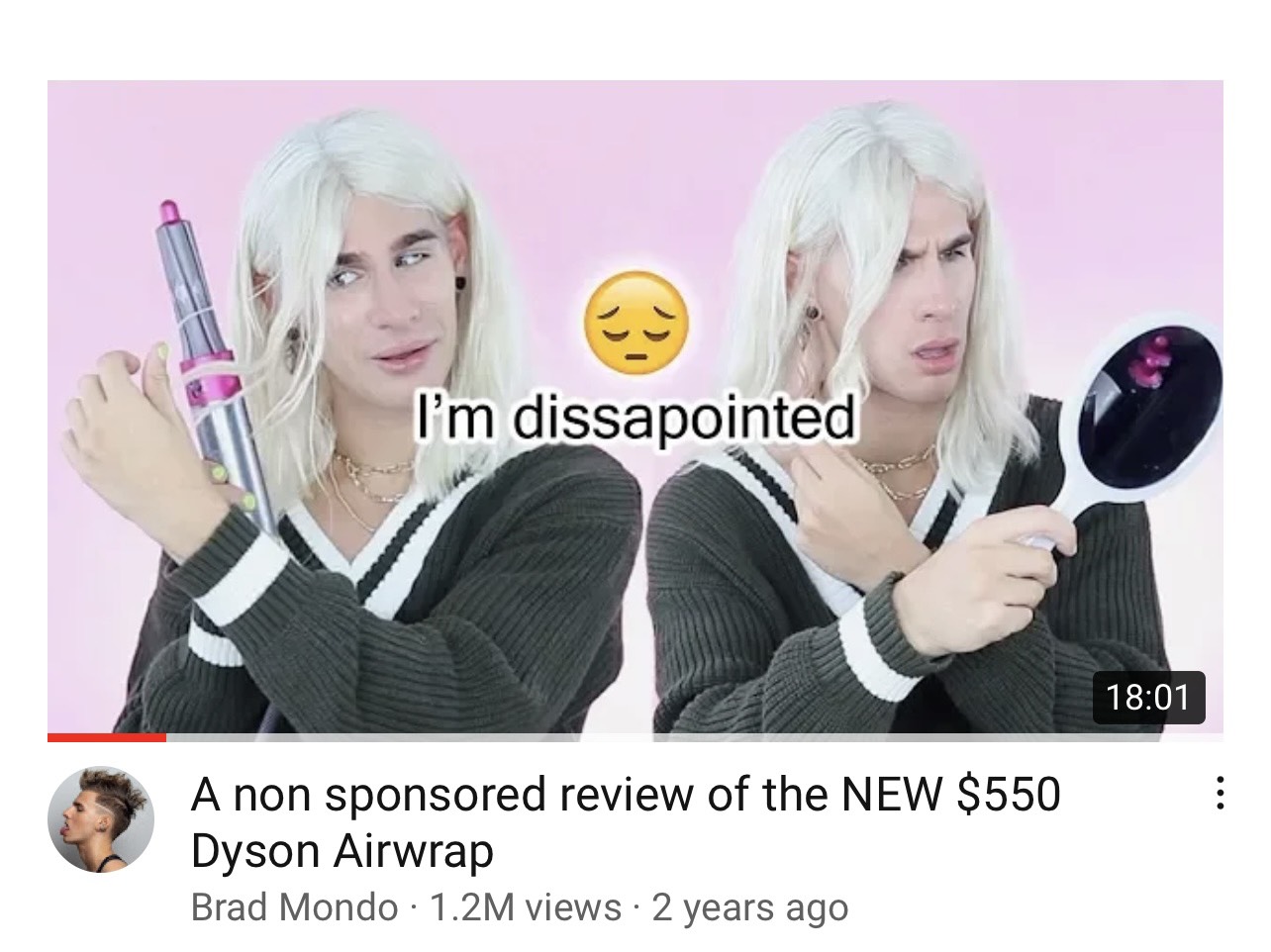 Another blogger named Maliblue compared Revlon one-step volumizer hair dryer to my Dyson airwrap with soft smoothing brush aachment.  She reviewed all the honest details between the two products. The result is Dyson did a great job around 140 fahrenheit, while Revlon roughly comes at around 180 degrees Fahrenheit.  She also clearly explains the pros and con between the two products. I think her review will be beneficial for people who decideto buy it ,since the price of Dyson airwrap is higher than Revolve around tenfold. For people who don’t want to spend a big amount of money, Revlon One-step Hair dryer would be another good choice. 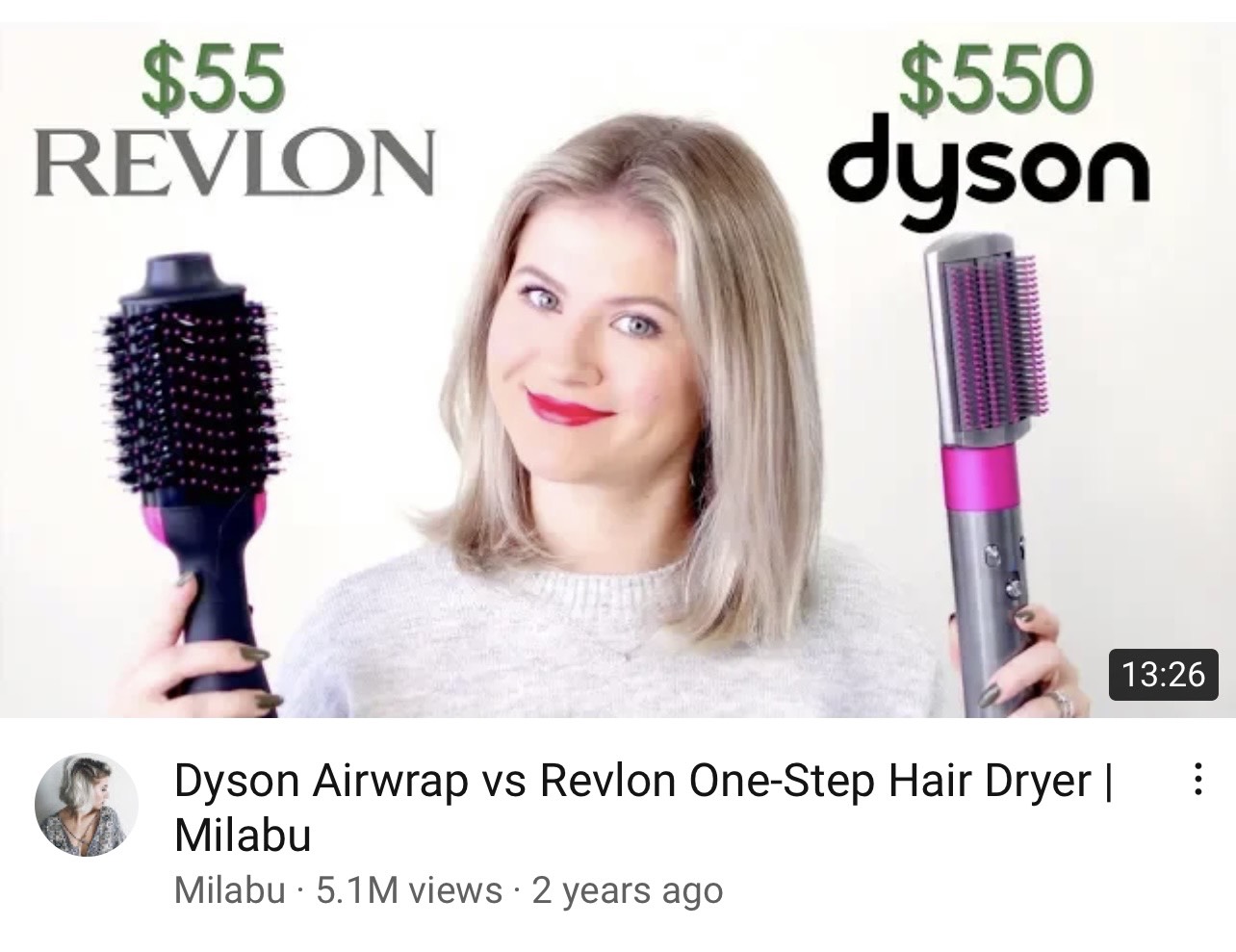 Like it did in Thailand, it is not a normal propaganda that online influencers tell us only the research information but also feelings that can connect with the consumers, or audiences.

Chopluem, a famous influencer, said that every woman has different hair hairlines, for example some women have thin hair, while some have thick hair. Dyson airwrap is a new invention that makes your hairdressing more easy and can satisfy women’s needs. She also explained about the function of each complementary  and detail that consumers must know about it. Moreover, she showed her picture after using a dyson airwrap. It would be nice for people who would like to find references to hairstyles. 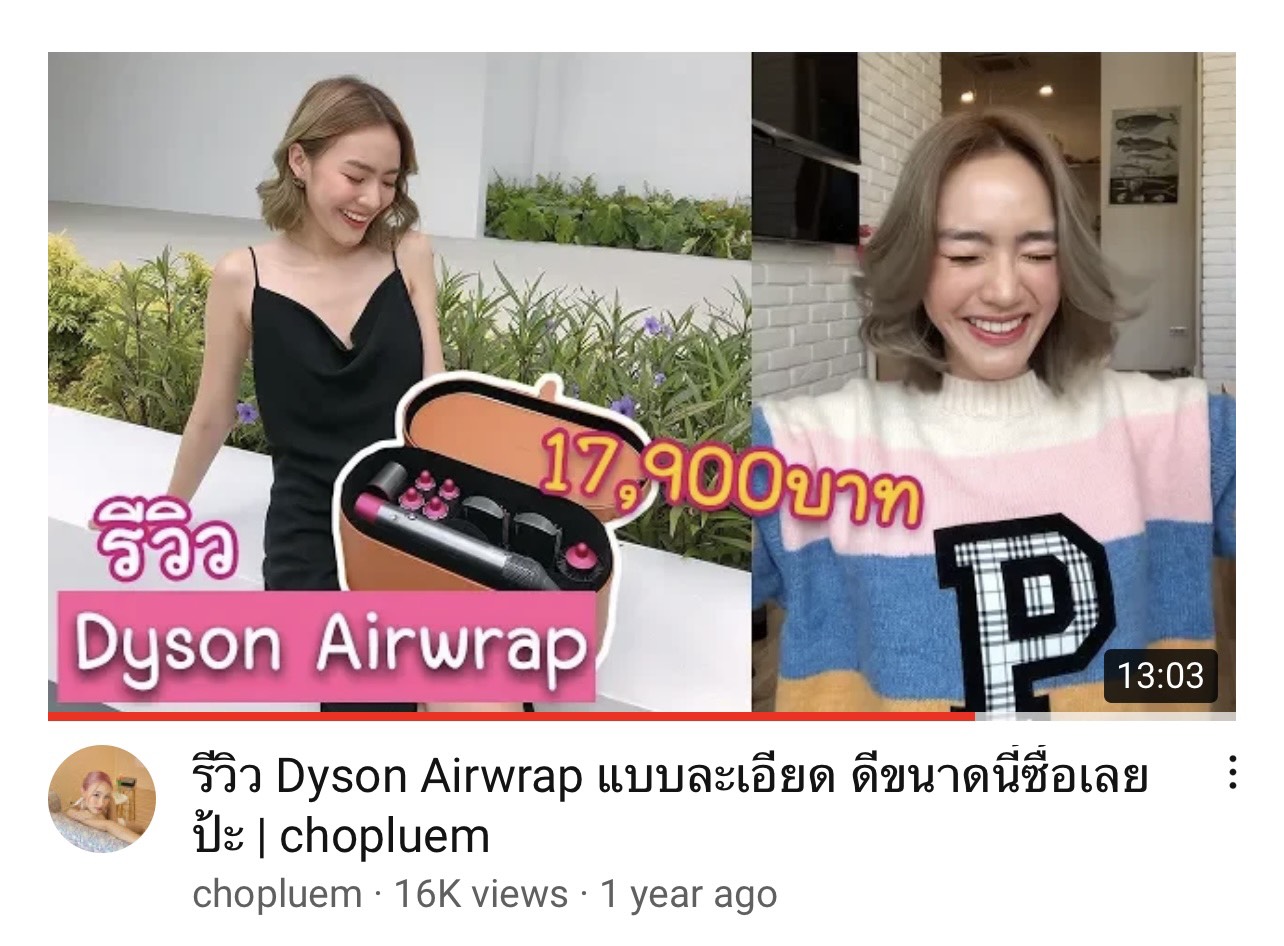 Valentine is my favourite beauty blogger that I’ve followed on instagram many years ago.  Her video made me completely want to buy Dyson airwra. She has the same  hair problem as mine. Moreover, she also mentioned the speciality of the volumizing bristle brush that came with the machine that can fix her hair problem. She showed how to use the machine from the beginning till the end ,and the different look that you will get from the different complementary of the dyson airwrap.  The result after using dyson airwrap is totally different looking styles. 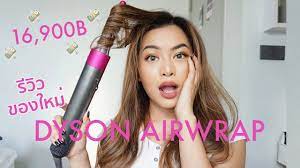 Then, it comes to my turn. After chillingly losing 500 dollars from my pocket, I received a neat-cutting caramel brown leather box housing all equipment for the hair. It is quite heavy but there is no handle or a shoulder strap to carry perhaps because it was not designed to be carried. When opening the box, there are several accessories to play with. Starting from a hair dryer, it has three switches for personal adjustment of the temperature and level of the air. When turning the machine on, users can push up to have cold air. Another switch is to adjust air strength and the other is for heat adjustment. The second equipment is a pre-styling dryer which is for blowing the air gently to prepare the curling step. I found this is not much used as other extended equipment can be replaceable. The third one is a soft smoothing brush which is a comb with several blisters covered on the tip to prevent irritating the scalp when combing. This is helpful for making the hair look natural with little frizz at the end of the hair. For wavy hair users, another comb attached in the box is a firm-smoothing brush which helps to straighten the hair. Moreover, there is also another type of comp which is a round-volumizing brush which is a rolling comb for rolling the hair to give volume. Finally, the highlight product is different-sized airwrap barrels. Two short barrels with 1.2 inches and 1.6 inches were supplied. To be careful, the same-size barrels are different based on the direction of the wind for curls. However, these are short barrels which may not be suitable to people with long hair. To maximize the use, long-hair people should additionally buy the long ones.

My anecdotal experience has a mixed feeling. In my humble opinion, the dyson airwrap is hard to use at first because it is a new invention which takes some time to learn how to use it. This machine has plenty of function and complementary equipment which is hard to understand. However, when I understand the function of the machine, it makes my daily life much easier. Normally, I take around 30 minute to dry my hair, while using a dyson airwrap takes only 15 minute. Moreover, I can say that the dyson airwrap is one of my secret tools why my hair always looks like professional looking styles everyday. I’ve been using a ton of hair tools, but this invention was different. My hair is always too flat and straight which has no volume, but the complementary, volumizing bristle brush makes a big change in my daily hairdressing.​ I feel like I have a professional salon at home.

From my experience, to compare the result  between using dyson airwrap and normal hair curling are totally different. After using the dyson airwrap, It made me surprised because it is obvious to see the volume of my hair and feel healthier. The special feature that makes me decide to buy this airwrap is high-tech features (digital motor V9), regulate the heat to minimize damage, which make my hair never feel the heat even using the higher heat or speed setting. Although a dyson advertising campaign claims users that the products can protect their hair from damage, it cannot recover dried hair or dyed hair that has been ruined already.  “Healthy hair” is derived from a host of factors: a hair dryer alone is not a panacea to resolve all hair problems.

Here is my hair before and after 4 hours using dyson airwrap. It can obviously see that my hair still has volume and curls. My suggestion is if you prefer your hair to have more curls, you have to move the curling shaft closer to hair roots. However, you need to be careful about the heat that can damage your scalp as well if it is too close. 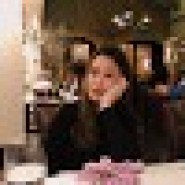