Home > MediaAndSociety > THE REPRESENTATION OF LGBTQ+ IN THAI MEDIA

In June every year, we all often see a group of people in many countries marching on the street, doing Drags and raising the rainbow flags on social media along with #PrideMonth. This is the month of celebration for the pride of being LGBTQ+ who always has struggled for their right and freedom of expression to promote gender equality.

Nowadays, It is easier for people to access the media and internet than the past. Mindset and perspective of people in society toward LGBTQ+ has been shaped in a better way due to the time shift and the influence of the media. So people are more open to LGBTQ+ to be a part of society. Especially in Thai entertainment media such as movies, TV series, fiction or even comics, LGBTQ+ has become a popular content. Many Thai producers these days have presented the LGBTQ+ issue through both mass media and new media, which influences the audiences in a broad area. Some were successful in portraying the true image of LGBTQ+ and reflecting their issue, meanwhile some failed to deliver the message by twisting their real image and creating wrong stereotypes of them. Therefore, the media affects how the audiences will decode or interpret the message, which the wrong interpretation could harm and also distort the truth of society.

The Development of LGBTQ+ Representation in Thai Movie Industry

The golden era of LGBTQ+ movie is around 2543-2550. This is the early era that LGBTQ+ movies were rising in mainstream media. Most of LGBTQ+ characters in that time were portrayed as a joker, who usually brings laugh and smile to people around them. The characters were not that deep or complex, it was designed to be friendly and funny in order to create an approachable image so that it is like the open door for LGBTQ+ people to participate and blend in with society more easily. Although it seems like they started to get some acceptance from society, the negative consequence is that they were expected to be funny all the time in order to be a part of society.

In that era, society stereotyped homosexual people in the same way, which is the entertainer with funny and strong personality due to media effect. Although it was extremely criticized by LGBTQ+ community, this kind of movie could still take up space in a broad area and make a lot of profit because it is new and fresh to the audiences. For example, two famous movies of Poj Arnon reflects the stereotype of LGBTQ+ people, the Iron Ladies portrays a group of humorous volleyball players chasing their dream and Hor Teaw Taek portrays the funny ghost living with humans. Therefore, the media obviously shaped how the audiences will visualize LGBTQ+ people and automatically provide the fixed pattern of personality that LGBTQ+ people should follow to become in order to get acceptance.

In the middle era of 2550-2555, LGBTQ+ film in Thailand was such a turning point of LGBTQ+ film industry because the direction of the characters had totally changed, it broke all the stereotypes and funny image of LGBTQ+ characters in the early era. The story mainly focused on the relationship between male couples, which the characters were designed to be more deep and real. It mostly reflects the reality of how LGBTQ+ people live their lives and how they also struggle to be a part of society. I would say, this era generated a big movement of LGBTQ+ community in Thailand.

Love of Siam is considered the most iconic LGBTQ+ movie in the middle era due to its new plot and a change of stereotype of LGBTQ+ characters. The movie was not portrayed in a comedy way anymore or even tried to clarify or focus on the sexuality and gender identity of the characters like the films in the early era did. The movie focused on the coming of age of each character, which believes that love is fluid and changes all the time depending on personal experience. Love of Siam reflects that sometimes it is not necessary to tell LGBTQ+ story in the explicit way, just let sexuality and gender identity be only the background of the characters and let the story simply tell by itself. After this movie was released, there is a huge change of LGBTQ+ community. Many people came out and proudly to reveal their gender identity. Love of Siam was not only a revolution in the media industry, but it also generated new movements in society.

In the modern day where gender equality becomes a big social issue that people care about, the direction of LGBTQ+ content has changed. There are more various genders, personalities and other elements that are presented in the media. It is not just about only gay couples anymore. Now we have seen a diversity of gender on the screen such as transgender women and lesbians being the main protagonist of the story even though the number is still less than male couple’s film. The trend of the content has changed over time, nowadays the director rather sell the story of the movie than selling the sexuality or identity of the character because the way people perceive the message has changed, they want to consume the core of the story in order to get something that they can apply with their lives.

I Told Sunset About You was a very famous coming of age series portraying the complicated romantic feelings of two teen men that they have for each other. This series attacked the emotion of people who have doubt of their gender identity or are afraid of coming out due to the fear of social denial. Apparently, the director wanted to portray the issue that LGBTQ+ have always been facing such as family and social acceptance and this really impacts the audiences to recheck about their perspective toward LGBTQ+. Another series is Baimai Teeplidplew portraying the beautiful transgender woman who comes back to revenge her long lost father. The protagonist has mental illness due to what her father had done to her when she was young. She ended up her life committing suicide. The series reflects the sexual oppression from the family who was supposed to be a comfort zone. Baimai Teeplidplew was successful in raising many questions for society to think about. Therefore, LGBTQ+ content these days is more realistic and deep than the past. The story comes first as a priority.

Yaoi is the boy’s love story, which originated from Japanese culture. Nowadays, Yaoi has been very popular in Southeast Asia, especially in Thailand where it has the biggest fan base. Yaoi was usually made into a TV series, which mostly portrays two straight men falling in love with each other. The characteristics of the main protagonists must be straight and masculine in order to attract the audiences, so that the fans will ship them to fulfill their own fantasy. Recently in 2021, the fan base of Thai Yaoi series has been expanding throughout many Southeast Asia countries, the amount of views through online media has reached up to a hundred million because the actors fit the beauty standard such as being tall and having white skin, which conform with the beauty ideal of Asian. Plus, people are open to LGBTQ+ and care about gender equality. Therefore, I believe that LGBTQ+ content is not only a trend but it also becomes Pop culture that influences society.

If we look deeper, Yaoi series does not represent the whole image of LGBTQ+ community because Yaoi series presents only one fixed pattern, which the two main protagonist must be both straight men or look masculine, which is against the nature and diverse personalities of LGBTQ+. Moreover, some Yaoi series avoid using the ‘gay’ term to describe the main protagonists, which distorts the reality and value of the true identity of LGBTQ+.

This leads me to the question “Do they really support LGBTQ+ or Do they just support straight men?”

However, the producers of Yaoi series need to rethink if their content really helps people understand more about LGBTQ+ or help society open their mind about gender diversity. It is not just about making profit or fan service, but they need to be responsible for LGBTQ+ community that were used to make money.

Why Does The Representation of LGBTQ+ in The Media Matter to Society?

The representation of LGBTQ+ in the media really matters to society because it is the image that the audiences will remember as who you are and it also affects how LGBTQ+ will be treated. I believe that the media is some kind of power to convey people, therefore some social issues such as gender inequality can be solved by inserting the right information and logical input to the media in order to avoid being stereotyped. In the past, LGBTQ+ movie in the past were stereotyped that they have to be materialistic, funny, good at dressing or being from a middle class background, but actually being gay is just about how you feel for yourself, which does not relates to personality, social status or lifestyle. The image of LGBTQ+ in the media nowadays is better than the past because of the progressive of the media. Now we can see many good LGBTQ+ content that changed all stereotypes and many people started to erase the old image and change their perspective towards LGBTQ+. Therefore, it is very important for every media worker to be responsible and ethical to the media audiences because the media is like a burning torch, if it is held high enough, people will see the light and it will lead them to the right direction. 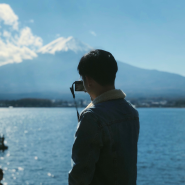 a citizen, generating a better day