All businesses in the world need its uniqueness to be able to attract customers and clients. When start-ups enter the market, they need to analyze their factors to succeed twice harder than the big companies that already have their loyal customers in the local or international market. One of the reasons is because they have to start everything from the ground up to be able to survive in a competitive market which is challenging to do so. However, technology advancement could help these start-ups to be able to grow using online social media as an intermediary to connect with their target market especially, during this time that new normal activities arise.

​During these days of pandemic situations, one of the changes that come into people’s lives without any notifications is to live in a new normal society. It is a new way of living that completely changes people’s lives, such as always wearing masks when going out, always keeping social distance from people and always washing hands thoroughly when touching public belongings. There are many businesses that are aware of this situation and see opportunity from it. It is important to follow up with trends to become first movers and gain opportunities in such a period of time. Therefore, being innovative is a key. As people change their style of living on a daily basis, innovative products can take these roles to become a part of people’s lives. For example, an air purifier that can kill 99% of bacteria is launched to respond to the needs of people. This is new to the market but it is in need of people who are concerned about hygiene during COVID-19 time.

The important of how to make start-ups business successful

​In general, the important factors that make start-ups successful are differentiation. In terms of differentiation, it could be product differentiation or cost differentiation. If the products are unable to substitute, the start-ups will have a higher chance of being successful due to their originality. For example, Apple had launched their iOs software that no other system development business could compete with. Thus, Apple gains their customers from their differentiation that it is hardly copied by others. Another one is costs. If the start-ups can dump the price lower than other companies, it will attract customers to give their products a try. Though, it is quite hard to do so as start-ups have a less chance to reach economies of scale compared to big companies. With less investment, it creates a less chance to have huge numbers of manufacturing. However, if start-ups can find new ways to reduce costs on their own rather than depending on factories, it can be a core competency for their cost differentiation. Hence, to be different is important for start-ups to gain awareness of their target market and, at the same time, build their reputation towards products and services.

​Not only businesses need to adjust themselves, people also need to find new ways of earning to be able to survive in this crisis of time. When COVID-19 hits in, many industries adapt themselves and reduce costs as much as possible to stay alive and competitive. It affects the employees. Working from home is one of the most common changes in business. It can reduce costs for both employees and business and at the same time follow government regulations to keep social distancing in practice. In terms of business, it can cut down their staff’s salaries. In terms of employees, they can cut down on their transportation costs. People who already have a full-time job but have an opportunity to work from home. Some of them will try to find second to third jobs. As many businesses cut down the cost of salaries and wages, many people find themselves unable to survive earning just 30%-50% of their normal salary. Hence, finding more jobs is a key to finding more money. Many businesses come up with qualifications that allow people to work from home by using personal devices, such as being an admin to a specific Facebook fan page. However, many people also become small start-up owners such as selling bakeries through online social media.

Why are you unable to succeed?

​On the other hand, start-ups could, as well, be able to fail with many factors. One of the factors that can make a start-up fall down is following trends without fully knowing the trends. It is good for a business to stay alert and catch up with the trends to act fast and respond fast to the needs of people. However, a business should consider their ability to enter the market first. If it is not their specialization, they should focus more on what they are good at rather than pulling every string at a time which later might hit themselves. For example, during the lockdown in Thailand, many people became bakers. It is common to bake brownies and cookies as these perishable products have their lifetime much longer than other bakeries like cakes or rolls. It is good for storage and also, these come in batches. So, it helps the baker to save time. If a business sees this opportunity and jumps into the trends right away without considering the possibility of being successful or failure, it could lead to a rough path to success. For example, if a start-up has little to no knowledge about baking, it is quite impossible to become a good baker in just one day. These skills need practice and experience through time. It is true that everyone can attempt to bake, but not everyone can get the same results even if all the ingredients are the same. This requires skills and talent. Therefore, a start-up should plan itself ahead and predict what should come and go when new activities are applied.

What are the most likely stuff to get there wrong that they don’t know how to fix?

Apart from the previous factors that could lead business to fail, there are many unforeseen circumstances in real life that can knock start-ups down. It could be the trend itself or it could be big companies in the market that become a huge obstacle. For example, the innovative products that a start-up thinks that will be a main product that can differentiate itself from other companies can take too long for research and development. Therefore, there will be a delay to launch. Hence, it is possible for other companies to develop similar products and release them first. The start-up can lose its opportunity to be a first mover in the market. Another vivid example is the banning of TikTok in the USA. TikTok is an application that has had a global market as their customers for several months and was going strong as a new application. However, when the USA announced that they will ban TikTokfrom its country, it shook up the TikTok situation to be less stable. They have to find a new strategy to compete with other applications that have chances of entering the USA market.

One of the role models that productive people respect is Warren Buffet, who is the richest man in the world. Even though he is the wealthiest man in the world, he has his life simple with his old little car. Instead of showing off his financial statement by using expensive stuff, he lets his famous voice out his name in every year of ranking. Buffet could be a role model for many people as he worked hard to reach his goal. He did not try for luck and never stopped working even though he became successful for decades. When he became one of the most successful in the world, he stayed humble. It could be said that his attitude is key towards his success. Many successful people look up to him as a goal and learn from his experience that he allows them to share.

Last, there are many key factors for start-ups to become successful. One of the factors is to differentiate itself from the market. Whether the target market is a mass or a niche market, the start-up needs to stand out with their uniqueness to let their customers know that it exists in the market. Once the customers recognize and are aware of the brand, there will be a chance to become successful. However, start-ups also need to avoid key factors that might lead the business into failure. Such as following trends without analyzing the possibilities thoroughly. It could be time-consuming to direct the company into the wrong path. Therefore, start-ups should always stay alert but well-rounded in terms of goals and visions to be able to succeed.
.
.
I hope you guys get some benefits from my blog and for those who want to start your own business, go for it. Thank you for reading. Have a nice day.🥇🧐 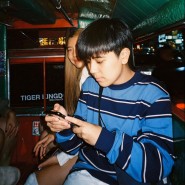 VLOG : Media in my quarantine life