Home > Tech > Blockchain and its potential impact on the media industry  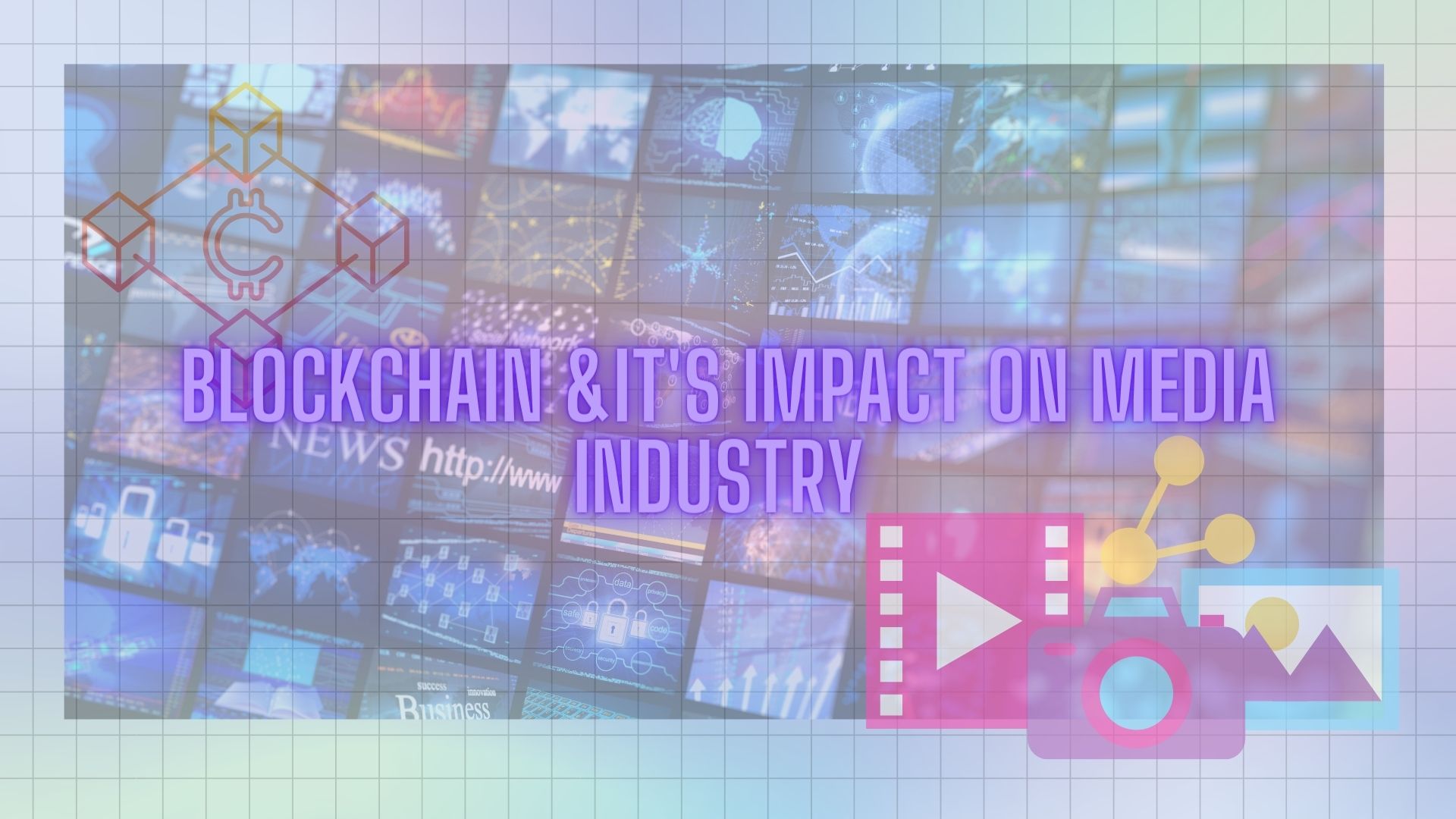 Blockchain is currently one of the most discussed and widely discussed technologies. Almost every industry has started to adopt this technology. Blockchain is now widely used and differs in many areas such as global payments. Peer-to-peer(P2P) protects and protects the security and privacy of data. More transparency across industries It is also a system with efficiency and speed. Blockchain is growing fast. and has the potential to destroy what exists. but also enable new business models.

The application of blockchain technology is explained in this article. To further understand the usage, consider the following: People have begun to use it for business contracts, insurance, and fitness subscriptions, among other things. Customer and member data is saved in the blockchain, which cannot be changed, and if the data is hacked, it only succeeds to cut the compromised chain, leaving the data intact in other safe chains. It’s also used to keep track of logistics. Track numerous deliveries and assist various departments with data backup. However, in this article, we will discuss the use of blockchain in the media business. To point out  the advantages of blockchain  that provide for businesses and their consumers or users. Furthermore, the media sector may need to be repositioned or updated in various procedures. and the action’s intermediary will be decreased and  the cheaper price, which includes the cost of media or entertainment, is ideal for younger digital natives and has made a significant effect in other sections of the media business. This will be explained in the next paragraphs.

What is a blockchain?

A blockchain is a digital, unchangeable, distributed ledger that records transactions as fast as possible. The consensus of the network members (referred to as nodes) is a necessity for each future transaction to be added to the ledger, enabling a continual process of control regarding manipulation, mistakes, and efficiency.

During the year 2009, Satoshi Nakamoto developed the very first blockchain transaction. The technology was originally designed to support the Bitcoin cryptocurrency, but it has a wide range of other uses. Because it eliminates the need for a centralized authority to settle transactions, blockchain speeds up the settlement process while also lowering transaction costs.

1.Cryptographically sealed – The data saved in the blockchain is protected so no one can copy, modify, delete or make changes from the original saved data.

3.Consensus-based – Authentication and approval of transactions on the blockchain is done by the network as a whole. Consensus may be reached through a variety of ways and approaches. Network members must unanimously agree that the transaction is correct, and rules can be altered to suit the specific conditions of a given transaction.

5.Chronologically updated – The data recorded in the blockchain is recorded instantly and at a precise time, and in addition, the data in that block is sent to the fast-connected chain, known as every recorded data. can be forwarded to different chains at the same time.

Blockchain-based computer code called “smart contracts” has just recently gained traction, but it has the potential to be critical for media firms in particular. Through the use of smart contracts, counterparties can eliminate the need for third-party intermediaries by automating transactional operations that were previously handled manually. With the help of smart contract technology, it is possible to create more efficient and effective procedures. There are a wide range of contractual applications that can benefit from smart contracts in terms of greater dependability, speedier transaction processing, reduced costs, and less reliance on intermediaries. More efficient legal content processing, such as for the Internet of Things, copyright law, or financial derivatives, will assist many industries.

Blockchain and the Game of Changing Media

Artists as major content creators, aggregators, and platform providers, together with (depending on the nation and type of media) a collecting organization managing royalty payments, have all emerged along the media value chain. This industry’s structure might drastically change with the introduction of blockchain technology. To a considerable extent, blockchain technology allows content aggregators, platforms, and royalties to be bypassed. As a result, copyright holders now have more market power. When it comes to payment-related use cases of blockchain technology, the technology has already been shown to work. As a result, new blockchain-based payment and contract possibilities are already endangering a portion of the media value chain. Pricing, advertising, revenue sharing, and royalty payments can all be affected by these. loss of a requirement for the central collection of payments or advertising revenues. Automated smart contracts ensure that payments are less expensive and that profits are distributed more evenly.

Blockchain-Related Media Opportunities in the Near Future

1.Paid content will now have new price choices – As micro-payments grow more cost-effective and digital material becomes more difficult to duplicate illegally, new price options open up as a result. Low-priced content has the benefit of being able to be swiftly agreed upon between the owner of the work and buyer. For example, In the past, if a customer wanted to read some content that they interest one, they might have to buy the full story of content, which is costly. Fortunately, blockchain brings customers and author a direct connection. If a reader is interested in just one content, they can buy just one of it directly called “per-use”payment model and the price will be cheaper and more fair. In addition, blockchains allow copyright owners to keep track of how their property is being used. Also assures they receive their just part of the revenues, which are computed and collected properly and effectively by the system. and another important thing is blockchain has a big impact on media firms’ personnel and payment methods, for example, articles published on news websites might be connected to their writers. Profit-sharing might allow not just well-known columnists, but also freelancers to be featured.

2. Content bypassing aggregators – Online media is still primarily reliant on advertising. Because no one wants to pay for digital content, ad-based distribution will continue to be crucial. The digital advertising landscape is complex and multi-faceted. Content providers and marketers are separated by many. It’s a win-win situation for everyone. Ad-based monetisation of new media assets like blogs or user-generated content is difficult. The main benefit of this topic is the facilitating of blockchain in customer relationships. So,everyone from leading media houses to small bloggers can easily generate advertising revenues. As blockchains permit an exact tracking of content usage, it also enables a direct allocation of advertising budgets. Together with new, blockchain facilitate micro-payments, content creators are able to establish direct relationships with their customers. Although, the new media industry in the era of blockchain still remain of aggregators but the power will switch to creator or artist.

Also, aggregators need to reposition because blockchain is a major changer for media and digital advertising. CEOs may need to reposition their firms. Media business paradigms must adapt to shifting power dynamics. Aggregators can quickly satisfy content creators’ needs with fair charging arrangements. To be viewed as an equal participant in the blockchain age. Platform providers’ relevance will be secured by smart search and recommendation features.

3. Distribution of royalty payments – Blockchain providing a transparent royalty distribution, for example ,this would include  a music directory with the original digital music file – associated with all relevant identities of people involved in the content creation. It is also possible to store instructions in form of smart contracts that specify how the artists are to be compensated and how sales proceeds are to be divided among all eligible parties. Preferably, an embedded blockchain-based mechanism tracks usage on streaming services, radio stations, television etc. and automatically accumulates credits or disburses actual payments to the respective copyright owners. So, blockchain can cutdown “black boxes” . Another focus is about opportunities and threats for collection associations. To develop a permissioned blockchain environment for musical rights. The industry associations would operate as “gatekeepers” to approve or deny entry to the closed ecosystem. Furthermore, established measurement and disbursement procedures used by radio stations, broadcasters, and other parties who play music commercially might become outdated with the advent of smart contracts, allowing collection groups to enter new markets. Blockchain may potentially pose a challenge to traditional collecting bodies. Specifically targeted commercial users who “do not pay their bills” have been the target of this ‘pursuit.’ such as YouTubers who utilize copyrighted music in their videos or event DJs who owe royalties. By using the blockchain, every music play is logged, and royalties are tracked and allotted to individual users. The collecting body’s position may soon be redundant as blockchain-based smart contracts collect and distribute royalty payments.

4. Secure and transparent C2C sales – Blockchain may enable content owners to generate additional revenue streams through consumer-to-consumer sales. While peer-to-peer file sharing is not new, it has historically posed a severe danger to musicians and film/TV makers. The huge number of ex- modifications and users sharing data makes peer-to-peer networks and their regulation difficult. For example, a subscriber records a show on DVD for a non-subscriber buddy. Giving or selling this DVD to non-subscribers is technically unlawful yet common practice. However, unlawful file sharing is still a huge issue for media companies, and the blockchain may help fix it. The blockchain gives content owners full control and visibility over how their songs and movies are consumed, there for this provide unformed of piracy and copyright violations . It also allows content owners to govern peer-to-peer content distribution and hence build new business models such as consumer-to-consumer content marketing. For example, a subscriber may now access and share their blockchain material. The subscriber will subsequently be charged directly for the information they shared. This allows consumers to share purchased material easily and legally, generating cash for aggregators and copyright holders.

5. Media consuming with boundless – Many consumers have suffered limitations in consuming media due to boundary lines. So many premium content subscribers (e.g. pay TV, VoD, streaming services) can’t access their subscriptions when traveling abroad. Material licenses are typically sold country by country, limiting access from other nations or territories. Also, DRM systems aren’t entirely interconnected. Other nations can’t access the subscription rights. Because every transaction/consumption is documented on the blockchain and quickly connected to a user, the blockchain may eventually replace or simplify DRM schemes. The content’s smart contract terms will trigger the payment.

So, blockchain’s potential benefits for the media sector are around payments and copyright tracking. It is possible that content makers will be able to maintain careful track on their play-times, royalties and advertising earnings will be divided precisely and timely depending on consumption, and low-cost material will be acquired effectively, even if offered at pennies. To sum up, media companies should consider blockchain-based applications and their potential influence on the industry: micropayments for purchased content, bypassing aggregators, and improved royalty distribution, to mention a few.